"Identifying the causes of skin rashes can be difficult since many types have similar symptoms. Body location and appearance may indicate probable causes. Localized itching or rash refers to a skin condition that occurs in specific area of the body, and is often the result of an insect bite or contact dermatitis (from something that came in contact with the skin). All over body itching which is referred to as a generalized skin condition is usually caused by some type of allergic reaction, which can be environmental or food.  Other common causes are some type of fungal or bacterial infection. Be sure to take note of accompanying symptoms such as lethargy (tiredness) and fever since these would indicate a problem that requires more immediate medical attention. This guide is not a replacement for medical care and should be used as a way of having an informed conversation with your physician."

Skin rash caused by Ringworm (Tinea corporis) on arm. Symptoms are skin patches and scaling at the edge.

What is a Skin Rash?

A skin rash is a skin condition where the color, texture or appearance of skin changes. Rashes can appear as blotches, redness, lumps, bumps, welts or blisters. They can be red, scaly, dry or weepy.  They can appear in one skin location or multiple locations on the body. Some rashes come and go while others don't go away.

When To Seek Medical Attention

Video: How to Tell if Skin Rashes Need Medical Attention


American Academy of Dermatology video filled with rash pictures on when to see a Dermatologist or Doctor for skin rash.

Most rashes are not life-threatening however some may signal something more serious. See a Dermatologist if you have a rash with any of the following symptoms:

Some Common Categories of Skin Rash are:

Most rashes are not dangerous. This, however, does not mean doing your own diagnosis is a smart move, largely because you may make the wrong diagnosis and get the wrong treatment, which may aggravate the condition.

If you have an infant, see our guide to baby skin rash or toddler rashes.

If you have a red scaly rash see our guide to rash diagnosis. 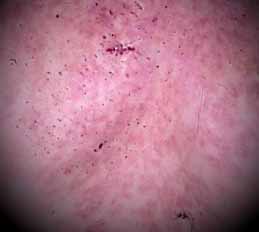 Types of Rashes that are non-itchy include Syphilis (shown on chest) and most cases of Pityriasis rosea (see picture below).

Flaking skin patches, not the result of infection

Flaking, itchy skin is also referred to as eczema or dermatitis. Some of the skin rashes found in this category are:


Atopic dermatitis is the most common form of eczema. The video contains treatment tips.

Typically hereditary. May affect children in the form of flaking scalp patches, peeling patches on legs, arms and the torso. This may progress in adulthood to patching on the whole body, around eyelids and on hands.

Those with atopic dermatitis might have allergies, however, most cases are not in and of themselves allergic. Dermatitis is normally inflamed and very itchy and red with a weeping crust, but is not contagious.

Literally, contact dermatitis refers to contact with materials that irritates the skin or causes a local allergy reaction. Examples include poison ivy or oak or metal allergies to nickel or lead. Mostly appears just in locations touched by reactive material. 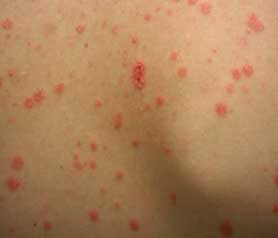 Large and Tiny Red Spots on Skin Caused by Psoriasis. Usually found on the elbows and knees, but can be found anywhere on the body. Shown here on the back. 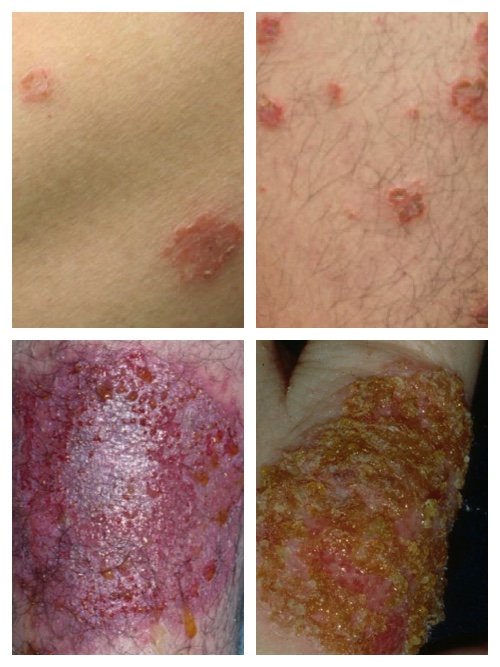 Nummular dermatitis causes a skin rash that usually appears after being injured by an insect bite, abrasion or burn. It can result in one skin patch or many.  It if seen more frequently in men age 55 to 65 years old.  Women are more prone to the condition during the teenage years.

It is a very itchy rash and may be covered with skin crusts or weeping.

Patches can last up to several weeks or months. Treatment involves steroidal topicals.

There are also three other fairly common body rashes not mentioned above including pityriasis rosea (scaly patches on back and chest), psoriasis (hereditary patching body-wide), xerosis (extremely dry skin).

Peeling skin patches, the result of fungal or bacterial infection

If you have an infection and also have a rash, the usual culprit is a bacterial or fungal infection.

Infections of this nature are not as frequent as skin rashes in the eczema category. One mistake made in the diagnosis of fungal infections is to call a scaly rash a fungus, when in fact it is usually eczema. 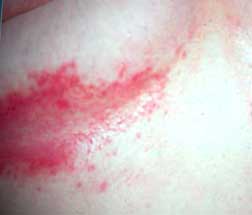 Candidal intertrigo are red plaques covered by a silver colored scale. The plaques are a sharply defined red rash.  The definition of intertrigo is inflammation of large skin folds.  10% of cases also have candida yeast. 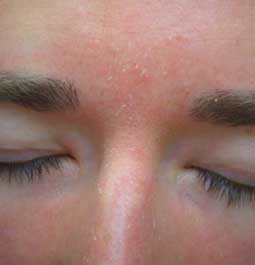 Seborrheic dermatitis is a reaction to a fungal yeast called Malassezia. It causes red skin patched (erythematous patches) common on the:

Tinea are fungal infections found on different parts of the body. They are all treated with prescription Clotrimazole or Miconazole cream. 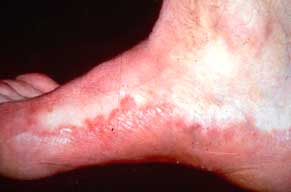 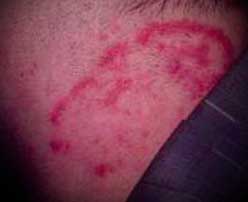 Rash on Neck Caused by Ringworm. Treated with topical fungal cream for 2 or more weeks.

Yeast infections are a type of fungal infection that usually strikes in areas where there are skin folds and are often beet red with pustules. These kinds of infections have nothing to do with hygiene, are not easily transmitted and are not highly contagious. 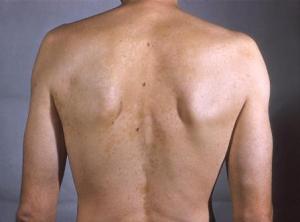 Skin Rashes due to yeast (also called tinea versicolor or pityriasis versicolor). As shown in the picture, the fungus caused scaly patches on the neck, back, and upper chest. Source: CDC, Dr. Lucille K. Georg

The most common bacterial infection is impetigo, caused by strep or staph germs. This typically affects more kids than adults. Hygiene doesn’t cause this problem.

Skin rash caused by cellulitis. Shown on the lower leg.

Cellulitis is one of the skin rashes that can form at the site of an injury or wound where bacteria can enter the skin. It is frequently seen as a lower leg skin rash.

Folliculitis is a bacterial infection in the hair follicles. It looks like a series of small red skin spots that have a diameter of under 5mm.  The bacterial cause is typically Staphyloccus aureus.

Folliculitis skin rash on buttocks. Can be seen in other areas of the body such as leg and chest.

A hot tub rash is due to germs that survive in the warm water of an improperly chlorinated hot tub or swimming pool.  The rash forms under the bathing suit and will go away on its own in several days.

Hot tub rash can be a form of folliculitis. Impetigo skin rash caused by a bacterial infection. Treated with a topical therapy such as mupirocin.

Impetigo is a bacterial skin infection. It is usually seen in children (age 2 to 5) and is spread through close contact. The bacterial cause is usually Staph or Strep.

Red, itchy bumps or patches over the body, including chest and back

An episode like this is usually an allergic or viral response. Skin Rashes due to shingles (also called herpes zoster). This skin rash can be painful and can last for several months or years. The condition is caused by a dormant chick pox virus. Source: CDC, Robert E. Sumpter

Rash due to an allergic reaction to medications

One other common cause of skin rashes is hives, which the doctor may refer to as urticaria. They come and go and no one seems to be able to determine their cause. They happen to everyone at some point in their lives and appear in different locations on the body, although they do seem to love the neck and upper chest, groin, elbows and under breasts.

Prickly heat rash occurs when individuals are exposed to outside heat and humidity levels that are higher than normal body temperature. In extreme heat the body sweat glands have difficulty with the cooling needs of the skin, resulting in a heat-related heat rash commonly referred to as prickly heat or miliaria. No treatment is necessary beyond staying out of the sun for an extended period of time. Avoid using creams that can clog the pores and reduce the efficiency of the body's sweat glands. Instead, if the itch is a problem, consider a oral medication such as an anti-histamine or a homoepathic remedy such as Skin Dr. Other conditions that occur due to high heat and humidity (primarily in tropical climates) are Hypohidrosis syndrome (from excessive sweating such as in the face), Tropical Acne (sick feeling, occurs in individuals that had teen acne) and Cholinergic Urticaria (1mm to 3mm skin wheals).

Chlorine rash is due to an allergic reaction to the chlorine on the skin surface. It can cause hives, red skin, and itch.  The condition occurs more often in people that have long-term exposure such as lifeguards. 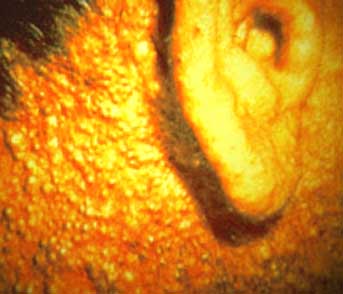 Chlorine rash pictures like this one show a condition called chlorine acne (Chloracne) where acne is caused by direct contact with chemicals such as chlorine compounds.

Symptoms may involve your whole body and involve scales, fungus, a viral vector or parasitic involvement. Each type of itch produces its own symptoms, but typically speaking, you will itch all over with a full body reaction.

For itching in just one of two spots on your body, you will experience the same or similar symptoms involved in whole body itching. There might be pain, weeping, redness, scaling, blistering or shingling, depending on the causes of your body itch.

See your doctor if you are experiencing any of the above signs or symptoms.

Diagnosis often begins with a visual examination, followed by a physical exam and questions to help the physician understand a possible reason for the itching. If there does not appear to be an infection or skin lesion of some sort, you may also have a skin biopsy, blood tests or x-rays. 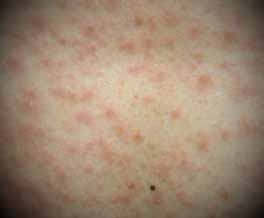 Non-Itchy Rash Caused by Pityriasis rosea (PR) which is usually asymptomatic. Some people get flu-like symptoms such as fever, sore throat, appetite loss, and swollen lymph nodes. Skin patches are salmon, purple, brown, or gray. Patches form "Christmas Tree" rash pattern when on the back.

For red scaly skin rashes a Doctor will usually follow the following procedure:

Try the two thumb test to as a guideline to see if a rash requires emergency treatment.  Take two thumbs and place into the rash.  Pull on the skin in opposite direction with thumbs.  If skin blanches or turns white in color, then rash in most cases is not an emergency.  If the skin stays red, then the rash requires at minimum a call to your Doctor.  Of course, if skin rashes are accompanied by high fever and lethargy, then call a Doctor.