" Prickly heat rash, also referred to as Miliaria, heat rash and sweat rash, is a common skin disease typically brought on by overheating due to high heat and humidity in people that tend to sweat a lot.  It can appear anywhere on the body.  This and other heat and humidity related problem such as Tropical Acne, Hypohidrosis syndrome and Cholinergic Urticaria are particularly common in tropical climates. While most of these conditions usually heal on their own,  it may cause a short circuit in the body’s heat-regulation ability, leading to illness. It is quite common in infants, small children and physically active people at work or that exercise. Symptoms break out when the sweat glands are blocked and include red skin rash and itch." What is Prickly Heat Rash?

As outside temperatures increase, and body heat increases above normal levels, the body seeks to cool down.  When the sweat glands cannot keep up, and as humidity in the air decreases the ability of sweat to evaporate, the body heats even more. With sweat,  water levels and salt levels in the body decline, leading to dehydration.  Said another way, when the outside temperature is higher than body temperature, the skin temperature will rise unless cooled by water or circulating air.

The result of inefficient cooling cause heat related skin problems such as prickly heat.  Other conditions that are also heat related include cholinergic urticaria, tropical acne and hypohidrosis syndrome.

Some people are more prone to the condition. Skin bacteria may play a role since people that have miliaria have 3x the amount of skin bacteria than those that do not get the condition when they sweat.

The causes of prickly heat include the following:

While it may seem like a minor problem to have plugged sweat ducts and/or hair follicles, when they are plugged, they form tiny, clear, almost translucent watery bumps, that sting like the dickens when they burst. This is due to the salt in your sweat. Not only is sweat a skin irritant, it has the potential to cause skin rashes and an itchy skin condition. 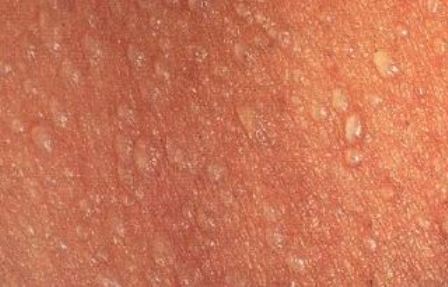 Prickly Heat Rash Picture (Miliaria crystallina). Note the superficial skin vesicles, with no noticeable skin inflammation. Treatment is not required and the condition only lasts for a short period of time. Source: Borden Institute, US Army

Prickly heat normally looks like a series of pointy, small bumps, located at the base of small hair follicles. You may see pink or red patches of skin initially. If your rash progresses, you may develop angry, raised red bumps, hives and skin welts and have an insanely irritating itch. Some people don’t experience the itch.

You may find prickly heat rash on various body parts, such as the:

How Long Does Prickly Heat Last?

Most cases of prickly heat last for 2 to 4 days. If it lasts longer, is getting worse or if a fever develops, see a Doctor.

Who Gets Prickly Heat?

Prickly heat rash can occur in anyone at any age. It tends to occur more often in babies and children who have immature sweat glands that are more subject to being blocked.

It also occurs in people when traveling to a warm or tropical climate.  Approximately 30% of people who travel to warmer climates get the condition.  The rash often appears several days after arrival.

Miliaria is also seen on people who are bed ridden for extended periods of time, such as on the back.

The first signal that you may have prickly heat is the red rash and small blisters in various locations on your body.  Quite often, the blisters will appear all at the same time. There are four categories of prickly heat rash, usually graded by what layer of skin they affect.

Miliaria crystalline has no rash, just tiny blisters, minor, if any symptoms.  Heals on its own in a short period of time. It occurs when blocked sweat ducts are close to the skin surface. The rash appears like small clear spots, almost similar to sweat beads.

Miliaria rubra is the most common form, where blockage causes sweat to leak into deeper layers of the skin, producing red rash which are capped with  blisters (vesicles). Itching, prickly sensation, no sweating in those areas. Heat exhaustion is a possibility. Frequently seen when visiting a warm climate. Treatment is required to keep the condition from becoming severe and then spreading to other parts of the body. Miliaria profunda is a severe and uncommon form of prickly heat rash that develops as the result of Miliaria rubra. It breaks out when the blocked sweat ducts are at the middle layer of the skin. Skin bumps are bigger than the rubra form of the condition.  It spreads like wildfire, presenting with a severe burning sensations. Blockage is deep in sweat gland, which leaks into the deep layers of skin. Rash is skin colored; not red. Higher risk of heat exhaustion and fever depending on the extent of the rash.

Miliaria pustulosa pustules form as a result of bacterial infection where the skin bumps are pus filled. Inflammation. Very high risk of heat exhaustion.  It is always the result of some other type of skin inflammation that effects the sweat ducts. 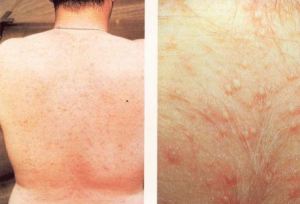 Miliaria pustulosa is a type of prickly heat that results in discrete skin papules that are not associated with hair follicles. It occurs after other forms of dermatitis (skin inflammation) that impacts the sweat glands Source: Borden Institute, US Army

You may have signs and symptoms that include the following:

Typically, prickly heat rash will go away on its own.  The best approach is to stay out of the heat and stay hydrated.  If you are in the heat, try and work in the shade and near a circulating fan or in circulating air.

However, if your rash doesn’t go away, it’s time to call your doctor. If you have the mild form of prickly heat rash, it will be evident on visual examination. The same holds true for the other forms of prickly heat rash; again, diagnosed on appearance and by your answers to questions about heat exposure.

If you have one of the more advanced forms of prickly heat rash, the doctor may want to take a skin culture, skin biopsy or exam skin scrapings to examine under a microscope. If the results are inconclusive, they may also get tests done for eczema, fungal infections, allergy reactions and bacterial infections.

If you have any of these following symptoms, go to the doctor immediately:

How To Treat Prickly Heat Rash


Video describes how to treat a Prickly Heat Rash.

Prickly heat rash will heal on its own.  To bring relief and to speed healing consider the following options:

Tropical anhidrotic asthenia occurs when the body stops sweating, or only sweats excessively in one area of the body such as the face.  Treatment involves rest and in a cool area over several weeks.  Recovery can take as long as 4 months. Symptoms at the onset of Hypohidrosis syndrome is similar to prickly heat rash, and then becomes scaly.

Tropical Acne occurs in hot climates where there is also high levels of humidity. It appears in individuals that had mild acne when teens, only to see tropical acne erupt later in life. It usually starts 3 to 6 months after moving to a tropical climate and is more prevalent in adults age 25 to 30.  Symptoms include skin lesions that are large, inflamed and pus filled.  Areas of the body include the upper thighs, buttocks, the entire torso (back and front), neck and arms.  The patient will feel sick.  Treatment involves moving to a cooler climate with lower levels of humidity.  Medications are available for treatment.

Cholinergic Urticaria is very common, particularly in younger adults. It is also triggered by high heat, particularly when exercising or in times  of stress. Individuals suffering from cholinergic urticaria will feel warm, followed by the appearance of skin wheals (1mm to 3mm in diameter). Other cholinergic urticaria symptoms include headache, nausea and pain in the abdomen). The wheals appear on the torso, but can appear in other areas of the body when the condition is chronic (severe).  Treatment involves removal from the heat, and no  exercise.  Antihistamines may be helpful.