Causes and Treatment of White Spots on Skin

" There are several causes for white skin spots. White spots on skin are irregular patches marked by a loss of pigment, which can appear in different parts of the body. The condition can start during childhood or later in life depending on the underlying cause. Common causes are Vitiligo, an autoimmune disease that effects light and dark skinned people as well as sun damage which interrupts the production of a skin pigment called melanin, the skin pigment produced by specialized cells in the skin called melanocytes. Most conditions are benign (not cancer), but all should be evaluated by a qualified medical professional. Each skin disease is  described below in text and pictures along with home, natural and Dermatologist provided treatment options."

White skin spots are common but they can be distressing, especially for people who value their personal appearance or for those who are concerned about skin health.

Other less common causes of white skin spots include:

White spot on arm caused by TSC (Tuberous Sclerosis Complex. Most patients show symptoms before age 10, with a higher prevalence in people with mental retardation or epilepsy. Treatment focuses on management of symptoms.

White skin spots may be diagnosed by most doctors according to their clinical presentation. Laboratory work-up may consist of blood tests, skin scraping, skin biopsy, and by using Wood's (ultraviolet) light.

White skin spots are not easy to treat because they usually persist for a long time. If caused by fungal infection, they may be treated by applying antifungal medicines such as ketoconazole, clotrimazole, and miconazole directly to the skin.Dandruff shampoos may also be applied to the skin for ten minutes daily as another treatment option. Other medications that may be applied topically include corticosteroid creams or ointments and immunosuppressant creams or ointments.

Other skin conditions that lead to white skin spots may be treated with phototherapy, a procedure where the skin is exposed to ultraviolet light by a dermatologist.

For answers on how to get rid of your specific condition, see a Dermatologist.

One of the most common causes of skin discoloration or depigmentation disorder is vitiligo, an autoimmune condition characterized by loss of brown pigment (melanocytes) from some areas of skin. It leads to irregular edged round white spots on skin that look white but feel like normal skin. These vitiligo white patches affects about one out of a hundred people in the US and may affect people at any age and any race.

One of the most common causes of skin discoloration or depigmentation disorder is vitiligo, an autoimmune condition characterized by the loss of brown pigment (melanocytes) from some areas of the skin. It leads to irregular edged round white spots on skin that look white but feel like normal skin. These vitiligo white patches affects about one out of a hundred people in the United States and is found in people at any age and any race.

Vitiligo in dark skin can result in difficulties for young people trying to fit in socially. The condition is associated with endocrine and autoimmune diseases.

It is possible that getting a sunburn will precede getting vitiligo. 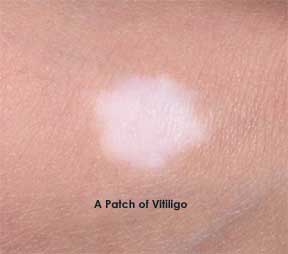 White skin spots caused by vitiligo are often seen in the face, elbows, knees, hands, feet, and genitals. The edges of the spots are well defined but irregular and may have dark borders.

The spots are 5mm to 5cm in diameter and are pale or chalk colored. Generalized vitiligo is seen more frequently than other forms and is represented by macules all over the body.

Diagnosis of Vitiligo is done in a Dermatologists office with a Woods Lamp. The disease needs to be differentiated from other conditions such as:

Dermatologist applied treatments such as Vitiligo laser treatment may or may not be effective. The condition can also go away on its own without treatment. There are several Vitiligo treatment options available:

Another common skin condition that causes white skin spots is Pityriasis alba, which usually affects children and adolescents. The cause is unknown, but it is associated with eczema, a chronic skin condition characterized by itchy, scaly, white patches of skin. It is also seen in people that suffer from allergies or asthma. 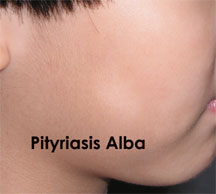 White Spots on Skin Caused by Pityriasis Alba is of Unknown Cause Source: Meisenheimer Clinic

White spots due to Pityriasis alba appear round or oval and may be seen on the face, neck, upper arms, and upper part of the body. The condition usually starts as red or pinkish blotches, which appear on a child or teenager. The color eventually dissipates and is replaced by white patches that are flaky, scaly and sometimes itchy. Most people under age 30 with Pityriasis Alba will see the condition clear on its own with no treatment. There are treatment options available in the Dermatologist office, although they are not effective on all people. Home Pityriasis Treatment for white skin spots involves addressing discomfort associated with symptoms such as:

A skin infection caused by a type of fungus called Pityrosporumovaleor Malassezia furfur leads to a chronic condition called tinea versicolor. This leads to the appearance of reddish-tan discoloration and white skin spots. This skin condition is common among adolescent boys and young men and occurs in hot climates. Other conditions that can lead to white skin patches are nevus depigmentosus, idiopathic guttate hypomelanosis, and halo moles.

Tinea versicolor patches have sharp edges and fine scales, which are found on the neck, back, chest, underarms, and upper arms. Other symptoms include itching and increased sweating.

Another choice are plant abstract formulations such as Naturasil Tinea Versicolor which can assist in eliminating Tinea Versicolor, can penetrate the skin and help eliminate the fungus from the skin surface.

After eliminating the infection, the continued use of medicated soap may help keep the fungal skin infection from returning. Basal cell carcinoma is the most common type of skin cancer. It can look pink or pearly white.  It can appear at any age but is more common in people 40 years old and older. It occurs in sun-exposed areas such as behind the ears.

White spots can stay the same for years, and then start to rapidly change. After being stable, a Basal Cell Carcinoma may suddenly change in appearance or bleed.

Nevus depigmentosus is a benign (not cancerous) pigmentation disorder that usually starts in childhood. It is caused by abnormal melanosomes and defective melanocytes in the skin. Treatment is provided for cosmetic reasons for is not required.(4)

White patches on the skin have a "splashed paint" type of appearance.

It is unclear why the white patches on the skin appear. Symptoms are seen all over the body, but more commonly at the end of the legs and hands and anywhere on the face, neck, and trunk of the body.

Diagnosis is via observing the condition over time and tests to rule out other conditions. Similar conditions that need to be ruled out include: Nevus anemicus is a congenital disorder. It causes white skin patches of multlple shapes and sizes on the skin. White skin patches are pale in comparison to surrounding areas.  White spots are 10cm in size.

The cause of the white skin are a is a result of blood vessels in the skin area being sensitive to the body's normal vasoconstricting chemicals.(5)

White skin areas appear when young or at birth.

Treatment is usually not needed since white skin patches appear under clothing or are light and do not require treatment for cosmetic reasons. White skin patches on leg caused by Nevus Anemicus, a skin problem that starts at birth or early childhood. A malignant melanoma can be white in color. If the Nevi (mole) is regressed, inflamed, or has a white ring around it, it should be examined by a Dermatologist.

Hypomelanosis of Ito is a rare disease characterized by white skin spots of patches. The skin disease starts during childhood and is usually found in the trunk of the body. White skin whirls or patches caused by Hypomelanosis of Ito