Signs and Treatment of Jock Itch

"Jock itch is characterized by a constant itch in the inner thigh and red rash in the groin area. The condition usually begins as a red patch high up on one or both thighs. As the condition spreads, a clearing in the center frequently appears with edges that are red, elevated and that have a defined border. Sometimes blister-like lesions appear along the rash border. The rash can spread down the thighs, up into the pubic area and even extend to the buttocks. It usually does not spread to the scrotum or penis. In some people, the only symptom is jock itch with no skin rash.

The cause is attributed to the presence of the fungus tinea cruris, also commonly referred to as ringworm. The condition is found primarily in adult men, particularly athletes, where the dark, moist conditions exist which allow the fungus to grow. The problem can be treated with over-the-counter medications or, if severe or the fungus spreads, with prescribed medication. The condition can last from months to years, usually in people that have a history of jock itch or athlete's foot.

Treatment is usually necessary for 3 to 4 weeks."

Jock or scrotum itch is caused by a fungus called tinea cruris, more commonly known as ringworm. Ringworm is a fungus that typically appears on the surface of the skin, but can become problematic when located in a warm, moist area, such as the groin. The sweat and moisture can lead to itching, which in turn leads to scratching. The scratching creates small cuts in the skin, allowing the fungus to enter the skin and spread to other parts of the groin and genital area. 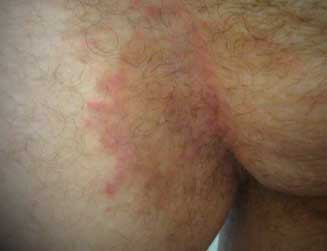 Signs and Symptoms of Jock Itch

Jock itch images are characterized by red inflamed areas of skin located around the jock. The most obvious jock itch symptom itching. The skin in the affected area might also become flaky and crack. A red, circular rash might also accompany the itching. The raised-edge and circular pattern of the rash make it appear distinctive from other types of rashes. Bumps and blisters might be present in the center of the rash rings. In less severe cases, the ring pattern might not be present, but might instead be represented by reddened skin.

When To See A Doctor

If you have any of these jock itch symptoms, see a Doctor:

Jock itch diagnosis can be performed by a doctor after an examination of the groin area.

The Doctor will differentiate the condition from other possible causes such as:

To confirm the diagnosis a Doctor might scrape the rash so that a skin culture can be examined under a microscope.

There are several jock itch treatment options that can be used to alleviate the discomfort caused by jock or scrotum itch:

If you have constant jock itch it could be a case where it is being transferred from your own case of athlete's foot to re-infection of the groin.  In this case, try treating both the feet and groin.

It is not unusual for jock itch to return. Reinfection can be minimized by wearing flip-flops when showering in public or in a shared shower (with other family members.) Other steps include using a benzoyl peroxide wash and alcohol gels.

A constant or persistent fungal infection could also be the sign of a yeast-connected health problem. See a Doctor for an anti-yeast product or try an over the counter remedy such as Kolorex.

The Merck Manual of Medical Information