Causes and Treatment of Feminine-Itch

" Feminine itch (also called pruritus vulvae or vulvar itching) has multiple causes. These range from bacterial vaginosis (vaginal itch due to infection), yeast (candida) or chemical irritants. If there is no unusual discharge or odor, the cause is probably irritation from over use of hygiene products, shaving or soaps in one of the most sensitive skin areas of the body.

If you try a home remedy first and it does not work within two to seven days, see your doctor, as you may have something that needs medication. Don’t wait out of embarrassment, as some infections may get worse if left untreated.  The question "why does my vagina itch" is more common than you think. Again, always contact a Doctor if symptoms last longer than 7 days. Most problems are minor in nature, but still require medical attention due to the presence of infection, both yeast or bacterial vagninosis. Some cases are caused by vaginal atrophy. When all else fails and when feminine itch is accompanied by burning or pain ask your Doctor about  other conditions such as Vulvodynia.

Feminine itching can also self correct after several days."


Causes of vaginal itching by Vagisil.

There are many causes of feminine itch as described below:

Feminine Itch can be caused by gram-negative Neisseria gonorrhoeae bacteria (shown here). Women's symptoms are mild and could be the cause of feminine itch. It is often mistaken for infection. Symptoms of gonorrhea include a burning sensation during urination, discharge from the vagina, and bleeding in between your periods Source:CDC/ Dr. Stephen Kraus

Vaginal Yeast infection (disease also called Monitial vaginitis or vaginal candidiasis): Yeast infection is caused by the Candida fungus. The body always has some of this fungus present, but when it colonizes beyond normal levels, itch can occur, such as when the vagina acidity levels are reduced. Yeast thrives in environments with estrogen, but is unusual in women with vaginal atrophy, a condition naturally seen in older women.

Symptoms include a  white thick cheese like vaginal discharge, often caused by antibiotics, sex, condoms, can also be transmitted by male partner. 75% of women will get a yeast infection at some point.

The condition is treated with over the counter Monistat or a prescription grade product.

Atrophic vaginitis refers to a condition where the vagina shrinks and thins. It occurs at times of reduced estrogen levels such as when breastfeeding, after childbirth or after menopause. It is a frequent reason for feminine itching due to menopause.

The vagina or vulva is very susceptible to allergens and irritants, particularly in women who are of reproductive age.

Symptoms such as itch are usually at the opening to the vagina (vulvar) not within the vagina itself, despite what you feel.  On examination there may also be redness, pimples, papules (a type of pimple) and skin crusts.

Vaginal itch caused by Vulvar Eczema which is a condition triggered by Irritant or Allergic Dermatitis.

The patient should avoid contact with potential irritants such as:

There are several steps that can help to reduce vulvar irritation:

Lichen simplex chronicus is the result of constant itching of the vulvar. It causes the skin surrounding the vagina to become red and thick.

If itching at night a sedative may also be prescribed such as amitriptyline, which produces a deep sleep without being awake enough to feel the urge to itch. 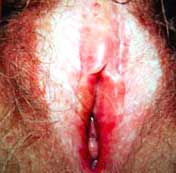 Vaginal itching caused by Lichen Sclerosus, a common condition in women before puberty and after menopause. Results in pain when defecating, painful sexual intercourse, burning and itch.

Lichen sclerosus is a chronic condition which results in skin change, inflammation of thinning of the outer skin layer.

It is very common and can occur at any age. It is seen primarily before puberty and in postmenopausal women.

Symptoms include a change in skin texture, and a change in the architecture of the area. This includes the loss of the labia minora and a clitoris that is covered by overlying skin.

Lichen sclerosus is treated with Clobetasol .05% cream for 6 weeks. Treatment results in 96% partial or complete relief with 23% of patients returning to normal skin color and texture.

Erosive lichen planus has an unknown cause. It occurs in women age 29 - 68.

The opening to the vagina may appear very red as seen in the picture above.

Vulvar itching caused by Erosive Lichen Planus. It is possibly an autoimmune condition that results in burning, pain during sex, pain in general and a raw sensation.

Treatment of Lichen Planus involves the use of hydrocortisone or triamicinalone creams. In chronic cases a hydrocortisone suppository is needed and oral prednisone.

Genital itching caused by Desquamative Vaginitis. It is characterized by red skin patches in the vagina. Discharge it thick and gray or yellow.

Similar to lichen planus. It is possibly caused by an autoimmune problem.

A Doctor will prescribe hydrocortisone cream.

The first signal that you may have feminine itch will be the itch itself. Depending on what is causing that itch, you may also have symptoms that include the following:

Your physician will need to do a visual examination of the areas that are itching. They will have a whole list of questions for you as well to try and track down or rule out things that may be causing your feminine itch. You may also have some tests, which may include urine and blood samples, a test for hormone levels, pap smear, skin biopsy and a culture and microscopic exam of any discharge you may be experiencing.

Some of the questions you may be asked include when your itch started, if you have had it previously and how severe it is. You will be asked to pinpoint the location of the itch, meaning inside or outside the vagina or vulva or both. The doctor will want to know how frequently you bathe, what kind of soap you use, whether you swim a lot and if you change your underwear often.

If you use scented products such as bubble bath, feminine sprays or douches, your doctor will also want to know about those, as they cause irritation and itching. You will be asked if your underwear is cotton or synthetic, if you wear pantyhose frequently or pants that are too tight. While the questions may seem odd, the doctor is trying to eliminate things that could have caused your problem. You will also be asked what you have tried to alleviate the itch, about your sexual activities and whether or not you feel you may have a sexually transmitted disease.

Be honest in your answers. The doctor is not there to judge you, he or she just needs to focus on what the cause of your feminine itch may be.  Other tests that may be performed include a Pap smear, biopsy (skin sample) or vaginal culture.

How To Get Rid of Feminine Itch


Tips for how to get rid of vulvar vaginal itch.

Natural remedies are also available that can help to relieve vaginal itch, burning and related discomfort. Products such as the FDA registered Vagi-Soothe combine these popular feminine itch remedies including:

When All Else Fails

If this doesn't work many women turn to diet change and washing the vulva with antibacterials soap along with over-the-counter acidophilus pills.  Unfortunately for many the condition continues to worsen resulting in slight cheesy discharge, burning and itch.

In this case the patient should ask the Doctor about other of Vulvodynia, which is the generic name for chronic pain or discomfort around the opening of the vagina.

How to Get Rid of Feminine Itch
by: Skin Care & Health


How To Stop Vaginal Itch and Infection
by: Health Information